I’ve recently been working on one of the more obscure areas of my collection, so I thought I’d share a few rare ones. Sit back and learn everything you ever wanted to know about the proofs/essays of Deutsch-Ostafrika (German East Africa).

During the 25ish-year existence of German East Africa, Germany issued 5 sets of stamps for use specifically in the colony.

The first of these were the 1893 overprints of the German Krone / Adler (Crown / Eagle) Issues of 1889-1890. In many of its colonies, German postage could be used without altering the value. However, German East Africa used the Indian Pesa/Rupie as currency, and calculating the equivalent postal rates in German Pfennig/Marks was difficult due to large fluctuations in the exchange rate. The stamps were therefore overprinted in the local currency, Pesa. 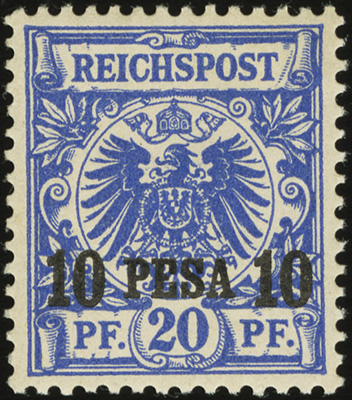 Prior to the decision on a final design, at least 10 essay versions were printed. These are very rare, and I don't own any at the moment. Michel 2020 CV is undetermined.

I'm unable to find photos of most, except poor-quality B&W photos from a reference work that's almost a century old.

Here's an example of one design that is currently up for auction with an opening bid of 3,000€.

To give you an example of what the other designs are, here are the album pages showing the poor-quality images of all 10 (is there anything sadder than en empty album page?) 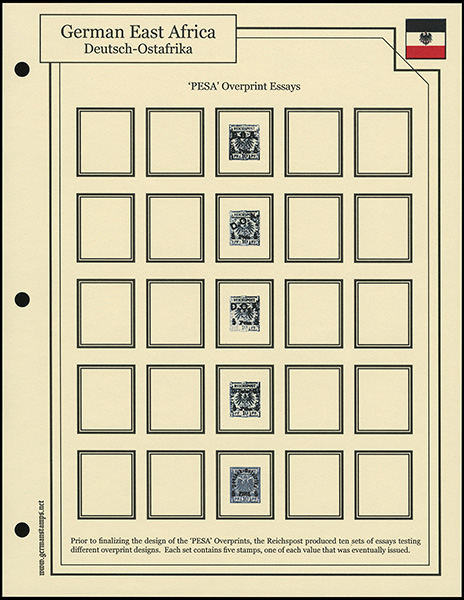 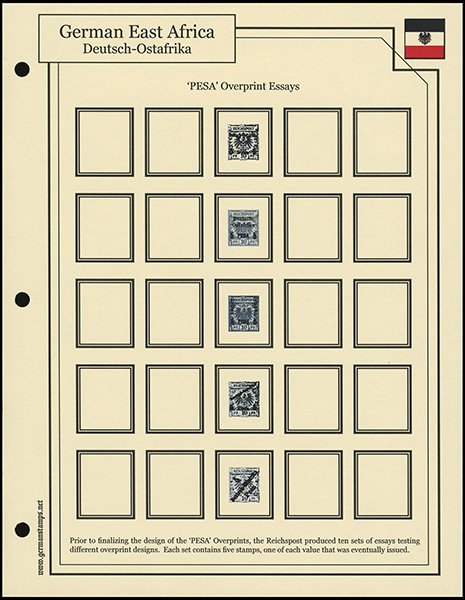 'Werthlos' Essays of the 1893 Overprints

Upon the issuance of this series, an additional set of essays was produced for the archive of the Reichsdruckerei (Reich Printing Works). These essays were overprinted with ‘Werthlos’ (worthless) in red, and differ slightly from the issued stamps in the design of the value overprint.

These stamps were largely unknown for decades until being re-discovered in the archive and released for auction in 1996. 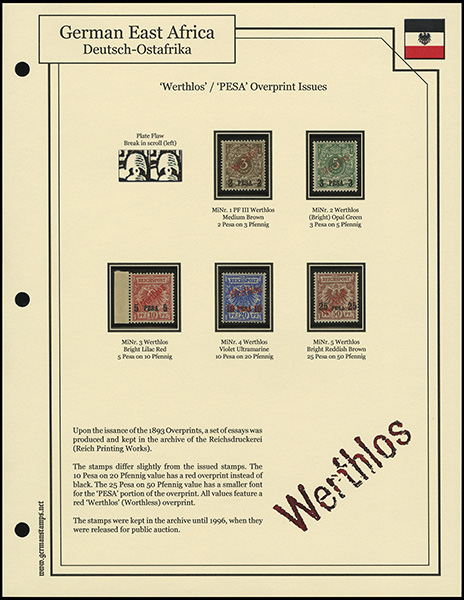 In April 1896, Germany began issuing a second set of overprints for German East Africa. The underlying stamps are, again, the Krone / Adler (Crown / Eagle) Issues of 1889-1890. 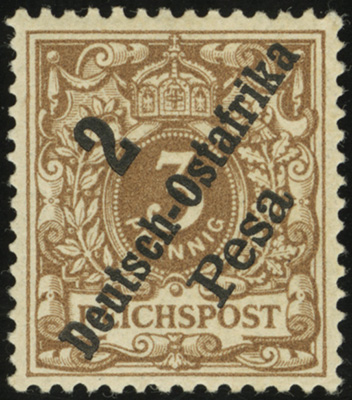 There are no known proofs or essays of this series.

In 1901, German East Africa received the new Yacht issues that had become the standard design for all German Colonies a year earlier. This design was used on the last three sets of German East Africa stamps. The first set can be distinguished from the later two by the lack of a watermark and values in Pesa/Rupien. 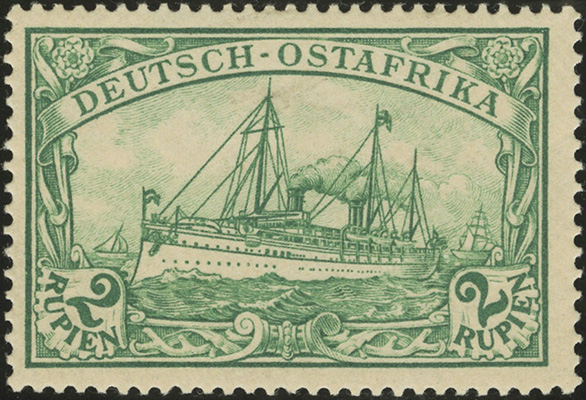 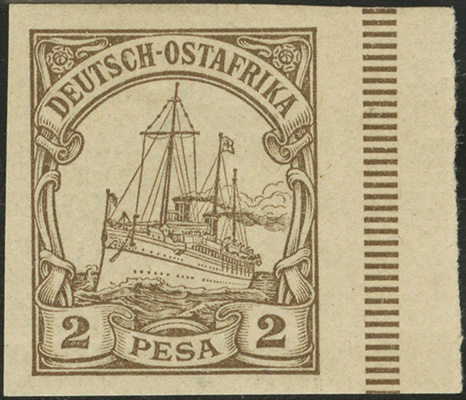 The upper margin copies also show an irregularity in the sheet margin — the value counters in the margin are in Pfennig/Mark values as if the stamps were a sheet of 3 Pfennig stamps, rather than in Pesa/Rupie values. 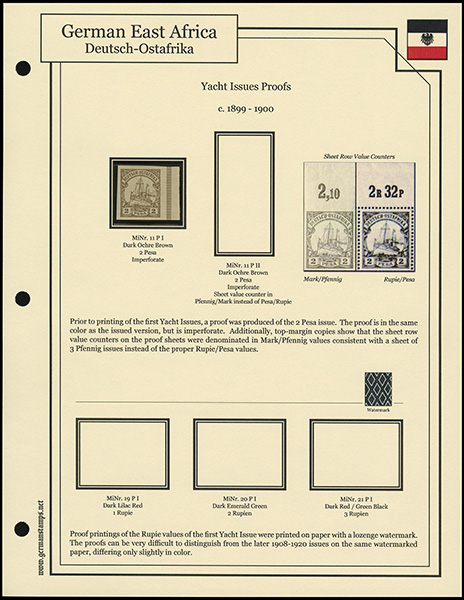 At some point, proofs of the three largest values, 1- 2-, and 3 Rupien, were printed on the same watermarked paper that would eventually be used on issued stamps of the 1905/1920 Yacht series. Because the same paper and design were eventually used on issued stamps, these proofs can be very difficult to distinguish from the later issued stamps. I don't own any at the moment or have a photo to show, but they are visually almost identical to the issued stamps. Michel 2020 CV is 3,000€ each (MH).

Finally, color proofs were printed of the 2 Rupien and 3 Rupien values. 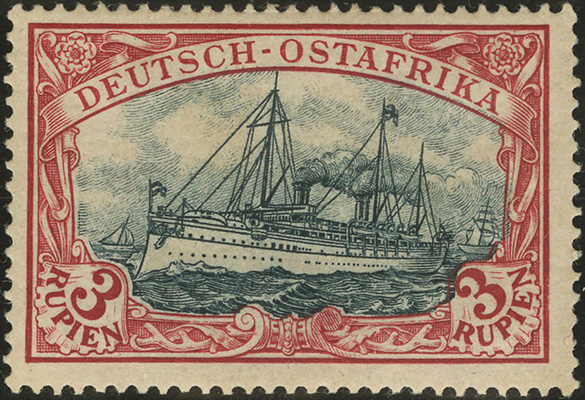 There is one known trial color of the 2 Rupien, and I just happen to own a copy. 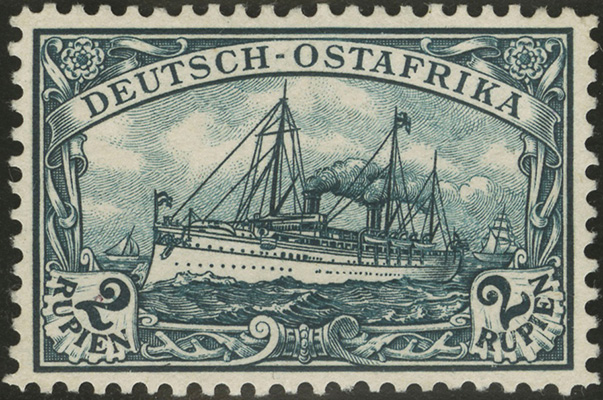 There are five known trial colors of the 3 Rupien. I don't own any, and have honestly only seen one in the wild. 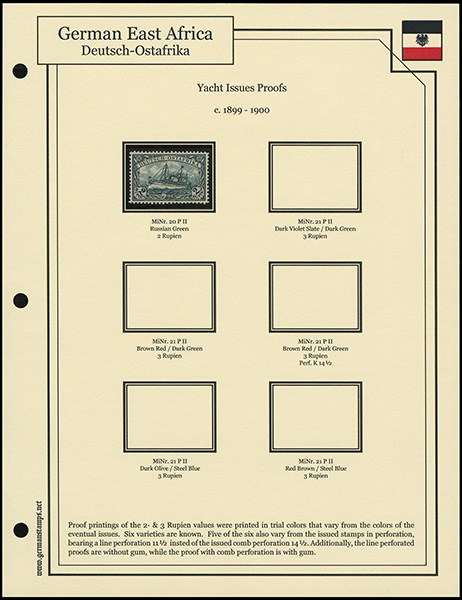 There are also differences in gum and perforation, but the colors are the big distinguishing factor. Michel 2020 CV is undetermined, but they aren't cheap...

In April 1905, Germany issued new Yacht Issues for German East Africa to reflect a change in currency from Pesa/Rupie to Heller/Rupie. Like the 1901 Yacht Issues, the April 1905 issues are unwatermarked. At some point, proofs of all eight values in the set were printed on the same watermarked paper that would eventually be used on issued stamps of the 1905/1920 Yacht series. Once again, all these stamps were issued in the 1905/1920 set with a watermark, so the proofs can be very difficult to distinguish from the later-issued stamps. I don't own any at the moment or have a photo to show, but they are visually almost identical to the issued stamps. Michel 2020 CV is 3,000€ each (MH).

Color proofs were printed of three of the values — 20-, 45-, and 60 Heller. In addition to the color differences, all have an additional color dot next to 'DEUTSCH-OSTAFRIKA' in the scroll, and are on a very white paper instead of the paper used on the eventual issues. One color is known of the 20 Heller, three colors of the 45 Heller, and one color of the 60 Heller. Michel 2020 CV is 2,500€ each (MH).

I own copies of two of the 45 Heller colors. And here is a demo showing the additional colored dot on the proofs:

Here they are on the album page: 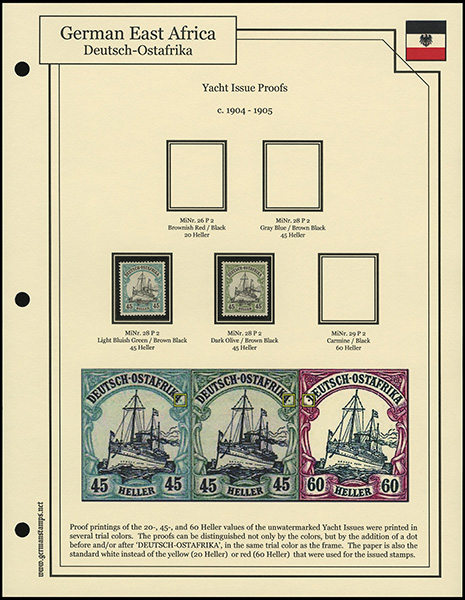 Imperforate proofs exist of the 2 1/2 Heller, 4 Heller, 15 Heller, 30 Heller, and 45 Heller values. The two lowest value proofs are overprinted 'Wertlos' (worthless). As with the previous 'Werthlos' proofs, these were printed for the archive of the Reich Printers, and were largely forgotten until rediscovered and released for public auction in 1997.

Finally, color proofs exist of the 3 Rupien value shown above. There is very little information on these, and I've never actually seen one. Michel doesn't give any info, and there is no mention of these in any of the usual references. In all likelihood, these were discovered and reported to Michel resulting in the listing, but I can find no record of one being offered for sale, Michel 2020 CV is undetermined, which would seem to confirm that pricing data is unavailable.

So there you have it — the proofs and essays of German East Africa. I hope it was entertaining, if not educational.
Presenting the GermanStamps.net Collection - German, Colonies, & Territories, 1872-1945
Top

Re: [Colonies] The Proofs/Essays of German East Africa

I recently received the last of the 1905/1920 Yacht Issue Imperforate Proofs and finished the album page, so here they are. 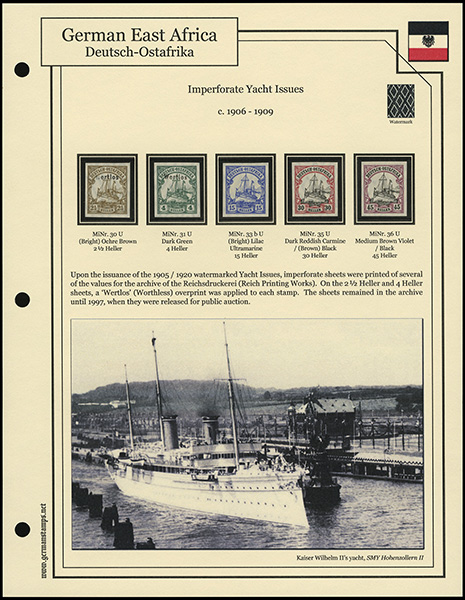